By Jasper Sharp. The robustly-designed and impressively laid-out new tome On Kurosawa: A Tribute to the Master Director by Peter Tasker inevitably prompts the same questions I raised a year ago in my review of Paul Anderer’s Kurosawa’s Rashomon. Does the world really need another book on this director, and what exactly is it about […] 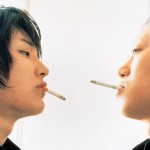 by Jeremy Clarke. Teenage high school movie Blue Spring (2001) centres on the leader of a violent boys’ gang in their final year at school. The nonchalant Kujo (Ryuhei Matsuda) has befriended Aoki (Hirofumi Arai in his debut role) since the latter first joined his class in their infancy: these days Aoki is Kujo’s number […]

by Jeremy Clarke. A young man is partnered with a Pikachu who has lost his memory and speaks English with the voice of actor Ryan Reynolds. Together, they investigate the mystery of the young man’s missing detective father. Pokémon Detective Pikachu is the latest big-screen addition to Japan’s hugely successful, worldwide Pokémon franchise and it […]

by Jeremy Clarke. You watch a short, scary video on the VCR. Then your phone starts to ring… you have a week to show the video to someone else – or die! That’s the premise of Ring (1998), the horror film which took first Japan, then the world, by storm. It’s also the key title […]

By Jonathan Clements. In her new book, Animated Encounters: Transnational Movements of Chinese Animation 1940s-1970s, Daisy Yan Du argues against the way that Chinese animation wants to see itself, so often presented as an entirely local, inwardly focussed realm that pays no heed to foreign markets. Particularly in the period under study, you might be […]