[Unboxing] Tokyo ESP. Take a look at our release out 28th March.

This coming Monday (28th March) sees the release of our Limited Collector’s Edition Blu-ray+DVD and Standard DVD release of the series Tokyo ESP. Today we’re going to show you what can expect when you pickup your copy of the series.

Before we go any further a quick reminder that this is available to pre-order now from the likes of Amazon UK, Zavvi, Base and even our own web shop. Tokyo ESP will be available in HMV stores across the UK from Monday.

Synopsis: Rinka is a high school student in Tokyo trying to make ends meet while supporting herself and her father. Her ordinary life takes a turn for the extraordinary when she witnesses a penguin and a school of fish flying through the air. After catching up to one of the fish, she passes out and wakes up to find herself suddenly granted supernatural powers. With her newfound ability to walk through solid objects, Rinka is about to learn just how transparent the world can be.

From the creator of Ga-Rei-Zero comes an adventure that shows how out-of-the-ordinary abilities of high school students can send a powerful message to evildoers the world over.

What’s inside? what’s on the discs?

And below you can find pictures of what our release looks like. You can click on them to enlarge them.

The front of the rigid case with the cellophane still around it.

The reverse side of the rigid case with the cellophane around it. NOTE: all of the information is contained on a sticker on the cellophane, not on the case itself.

All four spines while the cellophane is still around the case.

Now the front side of the rigid case after the cellophane has been removed.

The reverse side of the rigid case after the cellophane has been removed.

All four spines of the rigid case after the cellophane has been removed. 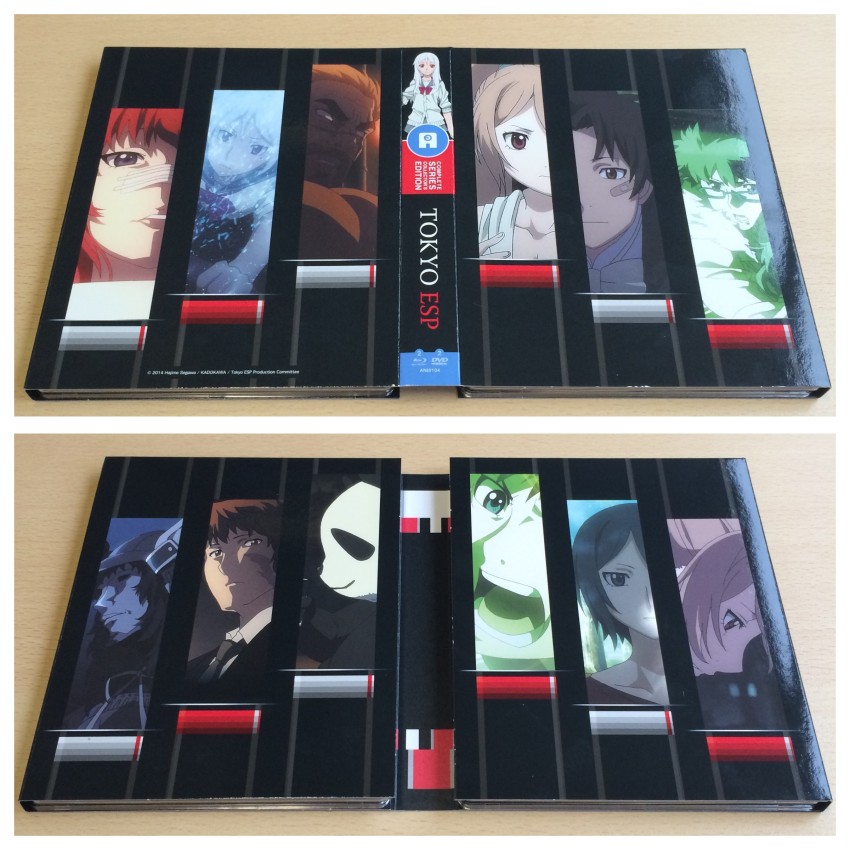 Because there are four discs in this set, it means the digipack is larger than you will have seen in other releases of ours. Here’s a glimpse of how it look before you unfold it.

A look at the outer side of the digipack, the top photo being sections with the centre being on the right, the bottom photo bring the other two section with the centre spine on the left.

And now a closer look at four discs contained in this release.

A glimpse of the front and back of the 20-page artbook.

A glimpse inside the book, specifically at the section focusing on individual characters in the series.

And a glimpse at the gallery section of the book, featuring some amazing key art from the series.

And if you’re opting for the standard DVD version, here’s a glimpse of that for you.

And that concludes this unboxing. As mentioned Tokyo ESP is available to add to your collection from this coming Monday (28th March.)