If you have Hayao Miyazaki’s Spirited Away to hand, look at a bit of the film about twenty minutes in. It’s after Chihiro has lost her parents, been saved and abandoned by Haku, and is descending to the bathhouse to look for the spider man Kamaji. You may remember the funny-scary scene where she hurtles down some wooden steps and smacks into a wall. However, we’re looking at what happens right after that.

If you look at Chihiro’s animation as she approaches the bottom of the stairs, her movement visibly changes. A new shot starts, and suddenly there’s a different-looking Chihiro. Her movement is looser, weirder, full of fluid mini-distortions. The girl’s striped jumper billows more; her footsteps seem quirkier, more crooked.

This “strange” animation carries on for a couple of minutes. When we get the first shots of the multi-armed Kamaji and his soot sprites, it’s not clear if they’re by the same hand (those characters are strange anyway). But the animation of little Chihiro stays in the crooked, billowing mode, while she quavers and hesitates, then ventures tentatively into Kamaji’s chamber. Her animation only switches back – becomes “Ghibli normal,” as it were – a few seconds before Kamaji reacts to her presence. Again, the switch happens in the transit from one shot (or cut, as shots are called in Japan) to the next.

You may have guessed the reason. This sequence was drawn by a very distinctive animator, called Shinya Ohira. These days, you can easily find information about Ohira and other master Japanese animators online. For example, there’s a montage of Ohira’s work on Youtube. An extract from a convention panel discussion examines his contributions to Howl’s Moving Castle and the “Kid’s Story” segment of Animatrix. We learn, for example, how one Japanese animator hands over to another relay style, as Animatrix slides from realism into Ohira’s wild expressionism.

For some fans, this is boring behind-the-scenes trivia. For others, it’s fascinating; and for others still, it’s vital to understanding what anime is and does. But really, it’s not a difficult interest to understand. If you’re an anime fan, you’re probably already inclined to follow the work of particular directors, studios, designers, writers and voice-actors. So why not follow animators, too? It’s another way of tying together the work you dig.

Recently, we interviewed Takeshi Honda, an elite Japanese animator. His work connects such apparently unrelated titles as Bubblegum Crisis, Perfect Blue, The Wind Rises and Kill la Kill. Or look at this montage of work by the extraordinary animator Toshiyuki Inoue – you may not know his name, but we guarantee you’ll know his animation. Or if you’re researching women in anime, then check out the showreels of the globetrotting Aya Suzuki, or try Atsuko Tanaka (the animator, not the voice-actress), who drew Lupin-a-leaping in Castle of Cagliostro and Calcifer’s fry-ups in Howl.

If you research animators, then you’ll soon run into a particular word, sakuga. It means “drawing pictures” in Japanese, but anime fans, being anime fans, have given it their own definition. For fans, sakuga means quality anime animation. In other words, it’s animation that’s more than just rote gestures; it’s animation that does something. It may convey motion with visceral force; it may express emotion that breaks the heart. It’s drawn with exceptional technical skill, and sometimes unique, idiosyncratic vision – hello, Shinya Ohira. It’s worth stressing that sakuga does not need to be “smooth” or “fluid”; creativity is far more important. 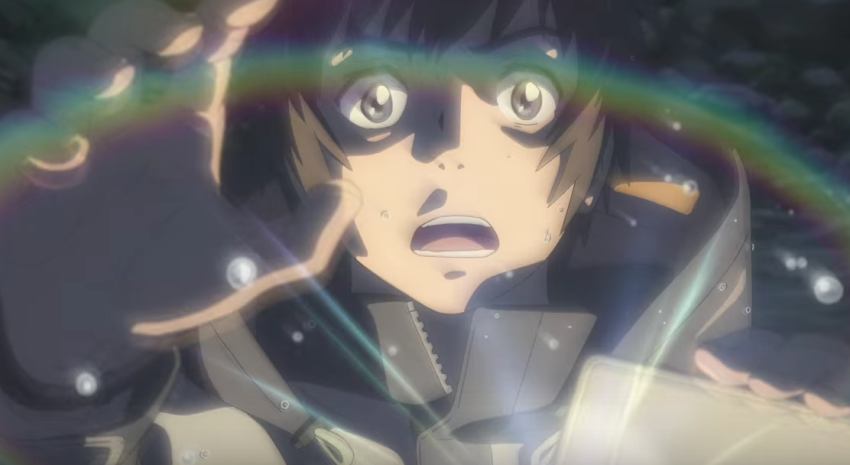 Sometimes the whole point of sakuga is to stand out, to break the norm. In Makoto Shinkai’s Your Name, a character drinks sacred sake in a cave, and we fall Alice-like through abstraction. Comets dive through ambiguous spaces, soaring through free associations and dream logic. When we asked Shinkai about the interlude, he explained it was created by Yoshitoshi Shinomiya, a classical Japanese painter who had free rein on the scene. Again, the crazy witches’ labyrinths in Madoka Magica were meant to stand out in the show. They were created by two animators called “Gekidan INU Curry” (“Theatrical Dog Curry”), who were influenced by Czech and Russian animation.

There are comparable standouts in Western animation. Dumbo’s pink elephant dance is a classic, responsible for more childhood nightmares than any other toon. DreamWorks’ Kung Fu Panda opens with a gloriously stylised action-fantasy sequence (nodding obviously to anime); it was overseen by veteran British animator James Baxter. In Pixar’s Inside Out, one scene has an ideal in-story excuse to let the animators go crazy.

But most sakuga scenes aren’t set apart in such ways. Rather, they’re presented as part of the “main” storyline. Because they’re by different artists, the look of an anime can change as one artist takes over from another, as in Spirited Away. In Western animation, these changes are smoothed over; in anime, they’re more visible. This may reflect the smaller staff on anime productions. As director Satoshi Kon put it, “In the Western (animation) industry, they’ve got probably five different people doing the job of two in Japan.” But practical necessities lead to new, inventive aesthetics.

Especially in TV anime, it’s easy to tell good animation from bad. Watch any show that has an incredibly well-drawn fight, then cuts to two stationary characters on which the only things moving are their lip flaps. Indeed, it’s tempting to think of sakuga just in terms of dazzling fights. However the animator Aya Suzuki, who we interviewed last year, says that, “If you go deep among the (animation) professionals, they rate the people who can do the subtle, minimalistic animation more.” Something like this, maybe. In Hollywood animation, one sequence that’s often put up as the Grail of subtle character acting is Bill Tytla’s animation of Dumbo’s elephants at the beginning of this clip.

Few people are likely to object to subtle animation, though they may overlook it. It’s the ostentatious sakuga which cause arguments. In particular, sakuga lovers argue there’s no sin in going “off-model” in anime, provided it’s done creatively and well. Exhibit A; a battle scene in Naruto Shippuden, part 167, when Naruto is fighting his foe Pain. Its animation was certainly different. For some fans, it was different enough to throw them out of the show; it broke their engagement and ruined their enjoyment. There’s an interesting fan-made video rant on youtube, though its author’s idea of a “well-animated” scene is dubious.

On the other side, it’s argued the Naruto fight was by highly skilled animators making an aesthetic choice. On this argument, even if you dislike the result, you should respect it. But this seems wrong. If a viewer honestly thinks an artist’s showboating ruined an enjoyable work, why not give the artist both barrels? Outside anime, critics are more harsh on serious artists who blunder than they are on lesser practitioners. If a Naruto fan thinks the animation spoiled the show, then it’s reasonable to blame the animators, no matter that they tried to make something special.

But this brings up deeper arguments that you can find rumbling on the net; for example, this column on the Wave Motion Cannon site, by the animation blogger Tamerlane who coins the phrase, “sakuga supremacism.” It suggests anime shouldn’t be judged on stories (or characters, for that matter). Anyone watching for the story is watching the wrong way, or at least a superficial way. If you want to talk about anime seriously, then learn about sakuga; sakuga is where anime art lies. Anime stories are incidental, and irrelevant to what anime does. “Even the best-written anime are formulaic, embarrassing and shallow,” Tamerlane declares.

This “sakuga supremacist” line echoes an argument in live-action film criticism. Namely, that film reviewers should be less fixated on story and characters, and attend to the language of film: the cinematography, the shot choices, the lens choices, the editing, the framing. The case was made by the film critic Matt Zoller Seitz, though there was a swift rejoinder from another critic, Tom Shone. Shone’s counter-case was simple. 99% of people go to movies for “boring old characters and plot.” Mainstream films are technically slick but narratively weak. Precisely for that reason, critics should focus less on technique and more on what technique is for – characters and plot.

One might reply that anime are not like mainstream films. Many are extremely niche productions for niche audiences. But that’s a thin argument. It’s objectively true that a late-night anime like Flip Flappers (a recent show with lots of sakuga) has a niche viewership. It may be anecdotally plausible, judging by net searches, that lots of sakuga fans like Flip Flappers. It’s still a perilous step to claim that Flip Flappers is made for sakuga fans, and should be judged by those fans’ standards.

Moreover, Seitz’s arguments about paying attention to the grammar of a medium can be used against sakuga supremacism. Think of some of the most celebrated sequences in anime: the canal scene in Ghost in the Shell, the magic train in Spirited Away, the shattered window montage in Cowboy Bebop part 5. All have good animation, but it’s not the animation that makes them great. The sequences depend far more on composition, backgrounds, the overlapping rhythms of editing and music.

The first Mobile Suit Gundam doesn’t grab the viewer with its crude animation. What holds up is its interstellar décor, its spaceships and gargantuan space habitats. Satoshi Kon’s films were defined less by animation than by his brilliant editing. And think how many heartbreaking, pungent, beautiful moments in anime don’t depend on moving drawings, but rather on their ordering and pacing of still shots, their lingering or panning over still images, their use of sound and silence.

Some sakuga rhetoric suggests a dubious essentialism, a feeling that anime should be defined by what differentiates it from other media. Anime plays artful tricks with still drawings, but so do comics. Kon’s editing was inspired by live-action films. Anime backgrounds mimic live-action sets and locations. On this line, only anime’s animation can be art. Yet this throws out so much of anime that it feels less like appreciation than a myopic insult. There’s also no stopping point. If anime backgrounds are too like live-action, what about realistic animation? Follow the argument to the end, and we’d be left with only the most abstract sakuga, like the trippy bit of Your Name or the formal experiments of Mirai Mizue.

Andrew Osmond is the author of 100 Animated Feature Films.